Ever since Jon Kabat-Zinn introduced mindfulness into mainstream medicine through his stress reduction program (known as Mindfulness-Based Stress Reduction, or MBSR), many more “Mindfulness-Based Interventions” (MBIs) have followed.1 Research supporting the clinical application of mindfulness for a broad range of both psychological and somatic conditions has exploded in the last decade,2 and MBIs offer a cost-effective, acceptable, and non-invasive means of integrating Eastern meditation practices into secularized clinical interventions.1 This article describes my experiences with Mindfulness-Based Cognitive Therapy (MBCT) for the prevention, as well as treatment, of mood and anxiety disorders, interwoven with participants’ experiences and relevant literature.

MBCT is an 8-week group intervention in which mindfulness meditation and Cognitive Behavior Therapy (CBT) complement each other. MCBT was specifically developed to prevent relapse in individuals with histories of recurrent Major Depressive Disorder (MDD).3 I have found MBCT to also be very effective for an actively mild/moderately depressed and/or anxious population, whose symptoms have not been adequately resolved with medication, or who prefer not to use medication.

MBIs are considered part of a new generation, also known as the “third wave,” of psychotherapy, in which the rational challenging of distorted thoughts (a key feature of CBT interventions) plays second fiddle to the focus on changing the relationship to all thoughts. MBCT takes CBT to the next level by combining traditional CBT strategies – such as identifying automatic thoughts, home work, and skills acquisition – with third-generation strategies such as mindfulness, acceptance of unwanted thoughts and feelings, and decentering (ie, the ability to step back and see thoughts as passing events in the mind rather than accurate reflections of reality).4 Mindfulness meditation has been found to reduce levels of self-perpetuating rumination in depressed patients, even for those who have been previously treated with CBT.5

Occasionally, I have still found it helpful to challenge particularly compelling thoughts as a stepping stone to decentering – especially when an individual is unable to see the thought as a thought, instead of accepting it as part of his or her reality. This was the case with Angelo, a Brazilian surgeon, who was convinced that he was a failure simply because there was – in his mind – no other explanation for the fact that he had not been able to find employment in Canada. Challenging the validity of his reasoning (“If you can’t think of any other explanation, does that make this explanation automatically true?”), supplemented with alternative explanations offered by the group, helped him take the distance required to see the thought as a thought, and not necessarily a fact.

Most people have some idea of what mindfulness entails: concepts like “being in the moment,” being “non-judgmental,” and “being in the body” may come to mind. In the psychological literature, mindfulness is described as an “intentional and non-judgmental awareness of the present moment,”6which can be somewhat difficult to grasp for someone who is new to meditation. I personally explain mindfulness as “the skill of knowing what’s happening in your body and mind at any given moment, without getting carried away by it” (based on Harris, 20147). One of our participants explained mindfulness as follows:

I would describe “mindfulness” as an easy concept to grasp but incredibly hard to do at first! It is definitely work, as you need to guide your mind out of the rut of thinking and then reacting the same way, over and over and over. (Sherry)

But how exactly does focusing on sensations help transform people, increase resilience, and prevent the recurrence of anxiety and depression?

Physical sensations provide the earliest warning signals that an emotion has been triggered. The sooner we become aware of these (often very subtle) signals in response to pleasant and unpleasant experiences, the sooner we can stop ourselves from blindly reacting, and instead choose to respond differently. By focusing on the physical sensations, rather than the thoughts accompanying the trigger, we can cut the downward spiral of unproductive ruminating thoughts, and instead develop new neural pathways and recondition the mind. As such, the emotion can be fully experienced and processed without being overwhelmed by it.8 In other words, focusing on sensations truly provides a root-cause approach to the treatment of mood and anxiety disorders!

I have found it extremely helpful to explain the “neuroscience of mindfulness” to MBCT participants prior to the start of the program. This way, people who are still skeptical that “focusing on the breath” can help them with their symptoms, or who simply need the theory before they can fully embrace the highly experiential nature of the program, become considerably more receptive and appreciative of the exercises being taught. In this intro-session, the pros and cons of a “thinking (and often ruminating) mind” are reviewed from an evolutionary perspective (“negativity bias”), and the 3 distinctly different neurological networks (default mode, executive and salience network) involved in the meditation process are explained (see Figure 1). In addition to preparing participants for the MBCT course, some individuals have mentioned that this session alone resulted in an increase in acceptance of depressive symptoms, and a decrease in guilt and identification with symptoms. 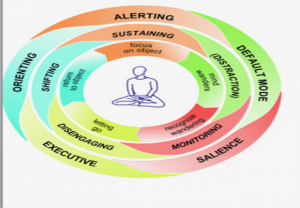 The highly experiential nature of the program allows participants to develop deep insight into the working of their own minds, based on their own observations and experiences. Experiencing the effects first-hand through various formal (eg, body scan and sitting meditations) and informal (eg, mindfulness of everyday activities) mindfulness practices, enabled participants to overcome their initial doubts and strengthen their motivation and commitment to their meditation practice.

I never ever dreamed of meditating and, even less, attending group therapy. Today, I’m not only looking forward to my daily meditation, I also eagerly await Tuesday’s group therapy. (Angelo)

Increased awareness, coupled with an increased ability to stay present with and tolerate uncomfortable thoughts and feelings, allowed participants to take control over their moods and habitual reactions rather than being controlled by them. This was especially apparent in their reactions to the people closest to them, ie, their spouses and children, as the practice resulted in an improvement in these relationships.

Through guided meditation, I became more aware of my body sensations, thoughts and feelings … In fact, once I got going, by learning to respond rather than react, I found I had more control over my thoughts, my feelings, how I interacted with the people around me, and how I dealt with events past and present. (Sherry)

In general, participants have expressed that they felt empowered by the combination of psycho-education and mindfulness practices.

Mindfulness has helped remove any negative feelings I had towards my tendency to depression and anxiety. That growing acceptance has created a place of power for me. (Bernadette)

Another major component of MBCT (and mindfulness, in general), is the development of self-compassion – an important buffer for negative self-feelings.9 Self-compassion is practiced in MBCT by bringing a friendly awareness to any expressions of self-judgment, criticism, and/or striving during the meditation practices, eg, through thoughts like: “I’m not doing this right,” or “I’m such a poor meditator, I can’t even focus on my breath for 1 minute!”

Take, for example, Paula, who returned to the second session feeling very frustrated because she felt like she was doing it all wrong. Through the process of mindful inquiry, she was able to see how she applied this same attitude to many other areas of her life, and how much tension this generated for her. She was then instructed to pay particular attention to these types of thoughts during the following week, and whenever she’d catch herself going down that road, she would try to soften and smile at herself, while thinking, “Here I go again.” Within 1 week, she noticed a difference in her stress level, while also gaining more trust in the practices.

Cultivating compassion can be enhanced by adding specific exercises to generate positive emotions, such as Buddhist loving-kindness practices, and “Nurture Positive” (as taught by Shinzen Young).10While not part of the official MBCT program, participants often appreciated this addition, which was introduced to them during the “Day of Mindfulness” – a 1-day retreat in week 6, and a valuable opportunity for participants to experience longer periods of mindfulness in silence.

MBCT practices also resulted in an increased awareness of pleasure. Starting with the “raisin awareness” exercise on day 1, the theme of “coming out of automatic pilot” and instead “waking up to life”11 is highlighted throughout the program. Participants commonly responded with surprise when they discovered how much more they enjoyed the raisin than they had anticipated, simply by paying close attention to its texture and flavor. Similar sentiments have been described through mindfulness of everyday activities, and the Pleasant Events Calendar.

The power of a group in which participants can share openly and support each other was unmistakable, and should be mentioned here as well.

Every week the group shared thoughts, feelings, insights, and even some laughter and tears! Every week I left feeling inspired and challenged. Meeting kindred spirits who could relate to what I was saying has left a deep impression with me. (Sherry)

Sharing with others made me feel less isolated when I meditated. When I meditate now, I feel I am meditating with countless others all around the world. I’m never alone!  (Bernadette)

If you have your own established mindfulness practice, MBCT offers a tremendously rewarding way of bringing mindfulness into your clinical practice and sharing its treasures with others. Having your own practice is also essential, though, to guide participants through the process of mindful inquiry, to embody the qualities you want to teach others, and to answers questions that can only be answered through an experiential, deep understanding of the practice and its challenges.

I can hardly believe the synchronicity

That has brought me to this place I am

From the place of aloneness on a walk toward freedom

I recognize I was never alone

From the surreal of all that is around me

I am the observer of the movement

Of the ebb and the flow

To the recognition of the particles of love around me

In every breath I breathe

I have never been alone

A well of gratitude swells up in my chest

Upon the blessing of the darks spaces

that cause me to search for this realization

I will honour both the darkness and the light

And all the ‘star launchers’ that have entered my life

I will never be alone

Acknowledgements: To Dr Don Colonne, MD, who has co-facilitated the MBCT courses with me, and who has been the driving force behind the “Science of Mindfulness” presentation. And to our MBCT participants, who have shown us again and again what can be achieved through this method when you do the work. 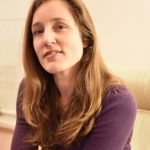 Lineke Heus, ND, focuses her work on a “3-D approach” to mental health, which includes the body, mind and soul. Ever since she participated in her first silence retreat in 2005, Dr Heus has been passionate about mindfulness and finding ways to incorporate this valuable technique into both her personal and professional life. In addition to facilitating MBCT courses, she developed a 10-week corporate mindfulness course called “Master your Mind,” and coaches people 1-on-1, both online and in her practice, Infuse Health, in Burlington, ON. Dr Heus graduated from CCNM in 2014, and also holds degrees in medical anthropology and sociology (2007), and physiotherapy (2002).